How Many Facies Can You Predict from Seismic Data?

One Dimensional Stochastic Inversion (ODiSI) is a new approach to seismic inversion that is specifically designed to aid the process of facies prediction.

How Many Facies Can You Predict from Seismic Data?

One Dimensional Stochastic Inversion (ODiSI) is a new approach to seismic inversion that is specifically designed to aid the process of facies prediction.

Seismic is a binary system. It is a dataset consisting of positive and negative amplitudes. Logically, this would mean that any given single seismic cube is only capable of discriminating between two facies at one time. Trying to predict more than two facies from a single cube will undoubtedly result in ambiguity.

There are several ways to address this problem in an inversion setting, such as optimizing seismic data for facies distinction, reducing the number of facies by using layers, and handling fluid prediction separately.

One Dimensional Stochastic Inversion, or ODiSI for short, is a new approach to seismic inversion that is specifically designed to aid the process of facies prediction. ODiSI takes many of the considerations mentioned above into account.

When You Have Many Facies

In a process such as seismic inversion, where facies are predicted from the seismic data, it is necessary to have enough information to allow multiple facies to be discriminated from each other. This typically means that inversions are done in a simultaneous method using more than one input cube. This could, for example, be different angle stacks or even intercept and gradient.

Simultaneous methods are based on the assumption that the different inputs can differentiate different lithologies. Angle Stacks or Intercept and Gradient, however, may not provide sufficient information. As such, standard inputs are often unsuitable for discriminating facies with subtle acoustic impedance differences.

One approach, developed by Patrick Connolly and others, is to generate Extended Elastic Impedance, or EEI, cubes. In essence, these cubes are an optimization of intercept and gradient to aid facies discrimination.

EEI is a valuable tool for exploration, prospect evaluation, and reservoir characterization. The method involves combining seismic volumes to enhance the visual representation of various trends or properties based on impedance, which ranges between acoustic impedance (AI) and gradient impedance (GI). The method projects a line through the cloud of data points on a scatter plot, where AI and GI are displayed in the x- and y-axis, respectively. AI/GI cross-plots such as these make it easier to discriminate between different facies.

Analysis of well data can help to determine at what angle certain facies can be separated. As an example, consider a reservoir where you have sand, shale, and cemented sand. In this case, two EEI cubes can be found. The first optimized cube will separate shale and sand. The second will distinguish cemented sand from one of the other facies. With these two volumes in place, it is feasible to predict the three given facies.

One important note, however, is that optimization goes both ways. As you optimize one element, another may become less visible or overlap with another. Care must be taken when performing optimization. Ultimately, when designing your inversion, you must ensure that you have suitable inputs that can discriminate or predict what you need.

Again, this is another area where the QC tools of ODiSI can assist in decision making.

Traditional seismic inversion methods usually generate a fluid cube and a lithology cube to use as input. A more efficient method, however, is to use ODiSI to select optimized stacks that can discriminate certain facies as best as possible.

ODiSI is the only inversion methodology specifically suited for facies prediction using optimized Color Inverted angle stacks as input. The methodology relies on the EEI approach and is designed to create optimized seismic cubes that can predict different lithofacies. ODiSI, then, reduces the need to rely on ambiguous background data.

In contrast to traditional fluid prediction inversion packages, ODiSI also uses deterministic fluid contacts, which reduces the number of problems the algorithm has to solve. A stochastic algorithm, such as ODiSI, is based on creating random samples. Having the best possible prior model will increase the chances of finding the correct answer as best as possible.

Figure 1 and 2 illustrates how different facies separate at different angles when using ODiSI.

ODiSI has become a game-changing approach to seismic inversion as it combines different approaches to estimate reservoir properties with limited information. By combining all captured prior knowledge about a given field, prospect, or reservoir, ODiSI builds a robust and comprehensive model of the subsurface. The method has already been successfully applied to several reservoirs, prospects, and fields – as you can read more about in our Upper Jurassic Fulmar Inversion case study.

Bruce is a geoscientist with a specialization in geophysical reservoir characterization and quantitative methods. He holds a MPhil in Geophysics and a B.Sc. in Petroleum Geology.  Bruce currently works as a G&G consultant in Cegal. Before this he has held positions in Statoil, ConocoPhillips and Midland Valley. 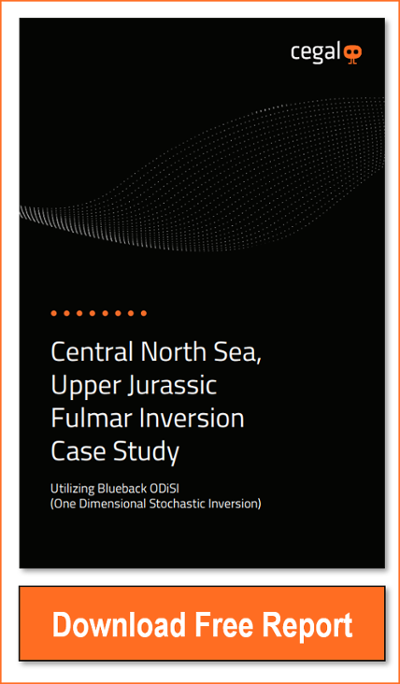